Ferring looks at sea defences
Arun District Council have a smart new information board near the Blue Bird Cafe describing how the sea defences will be improved this year along the Ferring seafront. Attention to 16 breakwaters, import of large rocks in strategic places, and shiploads of shingle dredged from south of the Isle of Wight. The shingle will apparently be graded. According to the experts 20mm (about an inch) stones are favoured.
Worthing have a different view. When they next have a major rebuild in 2005, they will take a broad mix of shingle because it bonds together better, and provides an easier beach for walking.

One of the huge barges bringing rocks for sea defenses from Norway dumped tonnes of boulders into the sea this morning after capsizing in bad weather off Eastbourne. The Norwegian vessel, moored two-and-a-half miles off the resort, ended up floating upside down after a night of gale force winds and stormy seas. Its load of 26,000 tonnes of rocks, to be used for the town’s sea defences, was dumped in the water.
(Argus 9 Oct 01) 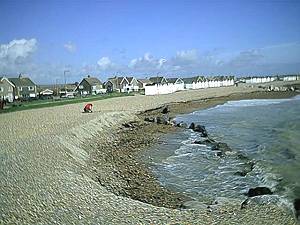 More storms and heavy rain
Gale-force winds whipped up the seas throwing shingle on to several coastal roads. Gusts of up to Force 12, reaching speeds of 70mph, were recorded in some areas. Bulldozers have already been brought into Selsey to try to stop rough seas and high tides from breaching flood defences at Medmerry. The next high spring tide is due at 1.12pm on Thursday 4 Oct at 6.2metres.
(Argus 2 Oct 01)

South-west gale-force winds plus very high tides threatened Sussex and Kent over the Christmas and New Year holidays. The tidal surge was the greatest ever seen here, and the waves at one time were 20 feet high. Considerable damage has been done to the foreshore, and there have been breaches of the sea wall at the usual places.

More coastal erosion
Department of Environment, from their office in Worthing, are going to spend £1.3million protecting their backyard. Rocks brought by barge from Larvic in Norway, shingle dredged from the sea, protecting the stretch from Brooklands Park to the lake behind the beach at Lancing. Quite a big project, but needs to be done; the A259 gets blocked by shingle every time there is a gale.
Further East at Birling Gap, the sea will be allowed to do its worst, and the hotel and cottages on the cliffs will eventually be washed away.
(March 01) 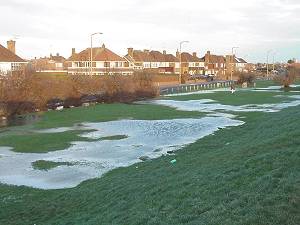 At Goring there is continuing concern about the sea wall near the Yacht Club. At times of flooding, water gathers in the grass area and swans swim close to the houses. The Department of the Environment deliver sandbags to the seven or so houses most at risk. Whether the water all comes from the sea seems doubtful, as there are ponds just inland and the drainage has always been poor.

And by the year 2050, the sea will have risen by 34 to 50 cm – up to 20 inches. Areas at threat are the caravan park at Selsey, the whole of East Head at Chichester Harbour, but also the whole coast between the River Adur and the River Arun. So the Department of the Environment will start work soon to raise the sea wall and the banks of the two rivers by a couple of feet.

It is a never-ending task to keep the sea defenses in adequate condition. It requires constant vigilance to protect our heritage and our homes.

Every winter it is the same. Gale force winds and high tides wash away thousands of tons of shingle off the beach. Selsey is taking most of the damage over the last few years. Dozens of giant lorries bring shingle from the dredger terminal at Shoreham Harbour. It is only since 1945 that any co-ordinated effort has been made to protect the coast. Now it is proving so expensive to rebuild the sea wall that they are even considering a ‘managed withdrawal’ and to write-off the large caravan park. The argument goes thus: why spend millions to protect land worth only thousands. It is not going to get easier; some experts predict that global warming will cause the sea will rise 20 inches over the next 50 years.

Logic says that a concrete sea wall as used at Brighton, all along the coast is the answer. But unfortunately this does not work in practice because it is continually undermined and will eventually collapse.

At Worthing every spring, a large yellow, and noisy, Gamble bulldozer will be at work re-profiling and compacting the sea wall. A yellow-coated banksman will be on hand to keep children and dogs from being run over. They have been bringing in boulders to the seafront at West Worthing, and then trucking them a mile along the beach to the Goring Gap. It is not quite clear what the eventual plan is, but certainly the whole of the sea wall here is under threat.

Quite subtle actions will cause significant changes. At the Blue Bird Cafe at Ferring which has been under threat for years, the engineers have removed just one plank from the wooden breakwaters to the west and suddenly they have all the shingle protection they need.

Some years ago the Ferring engineer at the time decided that, as the prevailing wind was from the south-west, he would angle the breakwaters just a touch towards the west – sort of south-south-west by south. It worked fine and it formed a pocket to trap the shingle. But the beach protection manual says that all breakwaters shall be built at right-angles to the shoreline so it went back to normal.

Researchers at the University have identified a breed of limpet which eats chalk at the rate of 1.3mm per year, each. There are millions of them, and they may be responsible for up to one third of the erosion of the White Cliffs of Dover, and at Beachy Head, Saltdean, and Birling Gap. 1.3mm per year each. Gosh.

The Seven Sisters near Birling Gap are up to 175m high. These are lasting better than the others because the chalk is harder compared with the Lower Cretaceous rocks to the East, and Tertiary rocks to the West and South.

How goes it at Goring

Damage at Goring has not been as bad, and we are grateful to Selsey for protecting us against the main thrust of the wind. But some work needs to be done each year to keep the sea wall in place. Each Spring the contactors bring bulldozers to re-profile the foreshore, building up the low spots at the top, smoothing off the mounds left by the high tides.

A shingle beach is good. But without breakwaters the entire shingle beach will be progressively washed away to the East. In 1997 WBC removed the existing wood breakwaters over a half mile stretch of beach and imported 3-5 ton rocks to build substantial replacements. Early consignments of rock included some small stuff, but the wastage as considerable as local residents acquired them for their rock gardens.

The large spur at Sea Lane protects the storm-water outfall, and six smaller breakwaters serve to reduce the thrust of the waves and keep the shingle in place. In summer the end of each rock breakwater is marked with a large red buoy. It is not decided whether this scheme is better than the original wood breakwaters.

For the work at Shoreham Beach, the rocks were delivered direct to the beach on large flat bottomed barges towed down from the quarries at Larvic in Norway, the only place where the quarry is conveniently next to deep water. At Goring the beach is not suitable for barges, and the rocks came in on lorries from inland quarries. 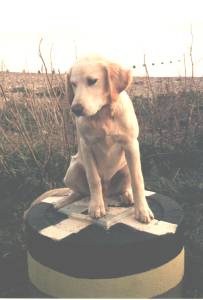 All along the foreshore are these very substantial concrete markers used by the surveyors for routine monitoring of the height of the foreshore. Despite the polite requests to leave them alone, they are used as cricket stumps, as platforms to admire the view. Or a posing pad for your pooch!

The Missing Church at Kingston Gorse

Erosion of the coast line has always been a problem. Off Kingston Gorse at East Preston, just level with the house with a green roof, and seen at very low tide, are some rocks. Why there should be rocks there no one knows. But the archaeologists have said that they are nothing to do with the church that once stood in the area which is now beach, dismantled about 1640 and the stones used to build the new Ferring Church a long way inland. The old church had been under threat for some years, but the Great Storm of 27th November 1703 destroyed the whole village, as well as a number of others along the coast, and washed away the Eddystone Lighthouse. It was this same storm where a number of capital ships of the Royal Navy were driven onto the Goodwin Sands, and sucked down into the quicksand with tremendous loss of life.
Don’t bother to paddle out at Kingston Gorse; you will probably not get washed away, but what you see is all there is!

Further East up the coast, the Bell Tout Lighthouse at Beachy Head was jacked up and moved 40 yards away from the cliff edge. The biggest cliff-fall yet,70m long and 17m deep, took place near the Beachy Head Lighthouse so that you can almost walk out there at low tide, and the cottages at Birling Gap have only a few years left before they fall into the sea.

Latest posts by admin (see all)